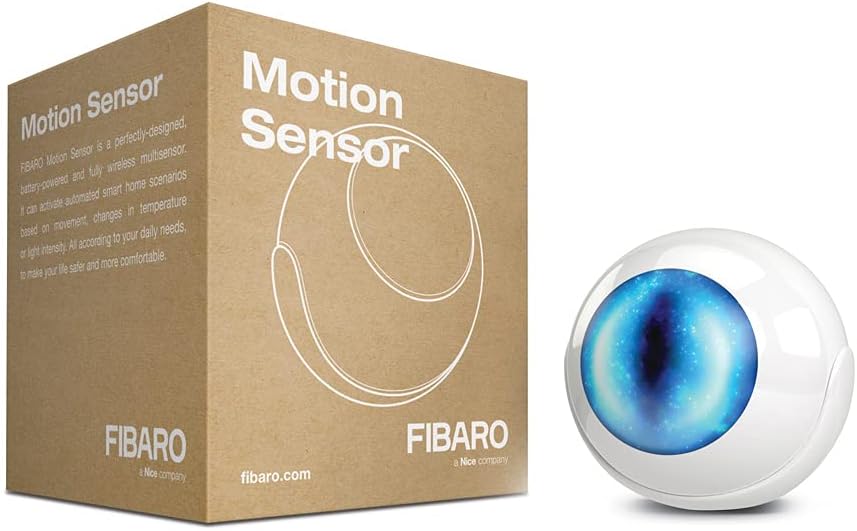 Inspired by the beliefs of the ancient Egyptians, Fibaro has designed the world's smallest, wireless motion sensor shaped it like a cat's eye. The Fibaro motion sensor combines four useful functions into a tiny, wireless Z-Wave motion sensor! It functions as a motion sensor, temperature sensor, light sensor and a vibration (accelerometer) sensor, thanks to its built-in accelerometer. The multicolor LED Pupil of the Fibaro motion sensor informs family members if it has detected any motion or the current temperature of a room. Set the color and its intensity to your liking and, as soon as you enter a room; you will know immediately what the temperature is. It can also trigger pre-set scenes such as lights turning on when you walk in the room. Please note that some of the advanced features of this device may require the Fibaro home center 2 (HC2) or HC lite controller. Our motion sensor is compatible with most Z-Wave controllers such as HC2, HC lite, Vera, Nexia, urc, Clare controls and home seer.

The ultra-intelligent Z-Wave PLUS sensor from FIBARO

The FIBARO Motion Sensor can be combined with scenes with other smart devices in order to adapt your home to your daily needs, you could also create reactive lighting programs based on the intensity of light, associate the motion sensor and vibration to get a notification when it detects unexpected activity, or automatically turn on your smart thermostat when your home gets too hot or too cold.

This device sets the standard for functionality and appearance for a smart product model. Its small design has inspired a new generation of Z-Wave sensors worldwide.

Get to know FIBARO

FIBARO is a global brand that provides solutions for building and home automation. In just a few years’ time, the FIBARO system has spread throughout 6 continents, becoming one of the most advanced, wireless smart home systems in the world.

Our solutions are entirely designed, developed amp; produced in Europe. Our engineers amp; employees constantly strive for perfection by improving the system, so that it serves its Users at best.

It was expected that many southern Queensland regions would be too cold for fall armyworm (FAW) (Spodoptera frugiperda) to survive. However larval populations were found in the South Burnett and Lockyer Valleys, and small numbers of moths were also detected in pheromone traps on the Darling Downs this winter. Caterpillars and moths in the South Burnett In July, larvae were… Stens 120-380 Transmission Filter